The bow in Japan can be used as a greeting, to present yourself, to show respect or extend an apology.

A part of this, there are different types of bows that is useful to know.

This is one of those gestures more present in daily life of the Japanese, so it’s really good to know a little more.

It is common to bow about 15 degrees when greeting a friend. Such an action can also be used to say goodbye.

In formal presentations it is expected to bow with a 30 °. It’s important to keep the head and shoulders straight and your hands at your sides.

After the exchange of the inevitable meishi (=business cards), it is useful to keep the bow for at least 1 second.

There is no need to maintain eye contact during the bow, on the contrary, it is considered in bad taste. If the person you’re meeting is very important, increase the inclination to 45 °.

Never bend over and shake hands at the same time.

Bowing is an expression of humility. You should always show respect towards someone or something.

You can kneel in front of an animal, a monument, the ocean or even while talking on the phone. It ‘s all a matter of respect, remember that.

All Japanese martial arts have their own labels on the bows.

Great respect is given to the sensei, but it is also important to show respect to your opponents.

It is common to bow to the gods in a Shinto shrine or a Buddhist temple.

This often requires a simple bow of the upper part of the body. However, in Shinto ceremonies you will be required to make a profound bow.

In Japan, customers are treated almost as gods. This bow is usually a minimum angle of 20 °.

In Japan, it is not enough to say “thank you”, it is always recommended to do it while bowing. Even drivers of cars make small bows with the head to thank the little courtesies.

More the thanking is heard, more the bow will be profound. 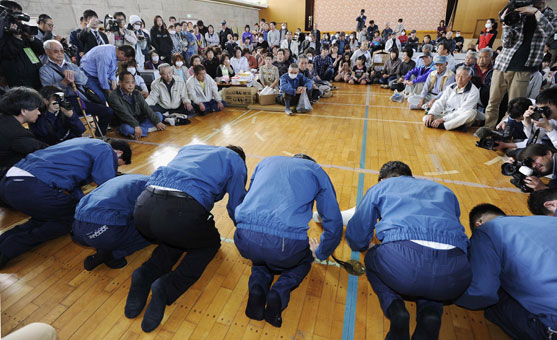 Bow to victims after last Earthquake in Japan

An excuse for something minor requires to bow with an angle 10 °. This can be used if you are dealing with a stranger on the street or if you cause a minor inconvenience to anyone.

However, if your boss is angry with you, the bow requires a 45 ° angle of the upper part of your body. Keep the bow for at least 5 seconds and apologize.

Then there is the extreme bow for apologies. Let’s say that you have committed a serious crime and you are apologizing to the victims. In those cases, you need to bow from a kneeling position.